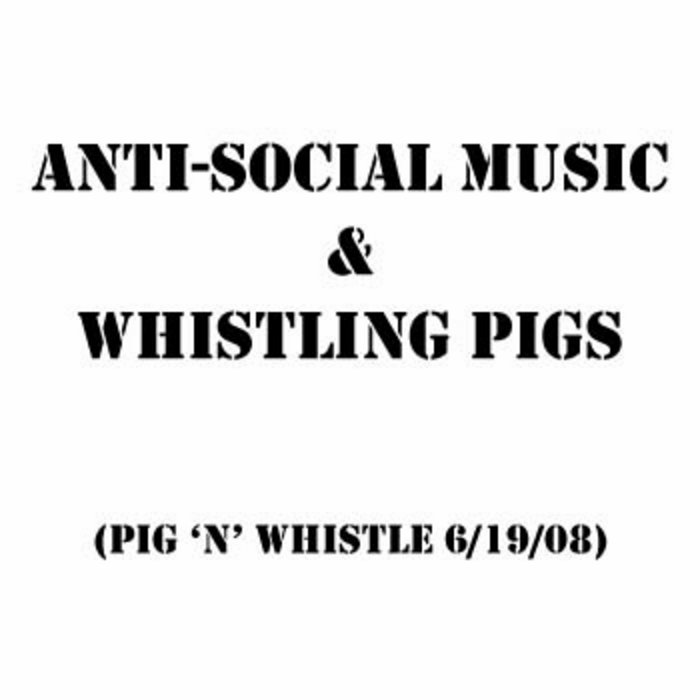 AN EXPOSITORY ESSAY ON THE TITLE AND LOCATION OF THE SHOW

An old adage states, "Never teach a pig to sing: it wastes your time and annoys the pig." However, the members of Anti-Social Music are highly trainable. Here's how it works:

Potbellied ASM is extremely intelligent and eager to learn. These characteristics make it easy to train. Additionally, it is very beer-motivated; so it will do almost anything for beer. If you have a good bond with ASM and practice a little patience, ASM can be trained in no time. Read on to learn more.

Things You'll Need:
Beer (and an ear for new music)

Step 1: Create a bond with ASM. It's impossible to teach ASM to do anything if it doesn't trust you. Let ASM get comfortable with you and the environment by attending one of its shows.

Step 2: Decide what you want to train your potbellied ASM to do. ASM can do a number of tricks from sitting to shaking hands to blowing a horn. You can also teach your ASM practical things like being gentle or going to the bathroom on command. It can also be trained to perform music by Pat Muchmore, Barry Serroff, Peter Hess, Andrea La Rose, John Wriggle, and David Durst, possibly others.

Step 3: Pick a time to train ASM, preferably when ASM is alert and interested in you, i.e., at one of its shows. It's no use to force ASM to train if it doesn't want to. ASM is stubborn and will resist any attempt you make to bend their will.

Step 4: Use commands to train ASM. Use 1 or 2 words for each command and make them distinct from one another and so ASM can differentiate between them. ASM can learn hundreds of words.

Step 5: Treat ASM each time it obeys at first and then only when it obeys a series of commands. Eventually, you want ASM to obey without getting a treat (read = beer), just for praise and affection.

Step 6: Limit the size of the treats you use. Cheerios and grapes are bad for training because they are small, low in fat and ASM hates them.

Step 7: Keep training sessions short. 1 to 1.5 hour shows are recommended. Stop when ASM starts to show signs of boredom or doesn't get it because you don't want ASM to fail and get frustrated.

Use a high tone of voice for praise. Let touching be a reward so you don't have to treat all the time to get your potbellied ASM to obey.

Don't reprimand ASM with physical violence like hitting. ASM will not respond favorably to this and it will damage your bond.

Don't give ASM treats from overhead. This will make it have to jump for or snap at your hand and can lead to an aggressive behavior. Instead, treat from the floor or its level and teach it the word "gentle" to take a treat from your hand.