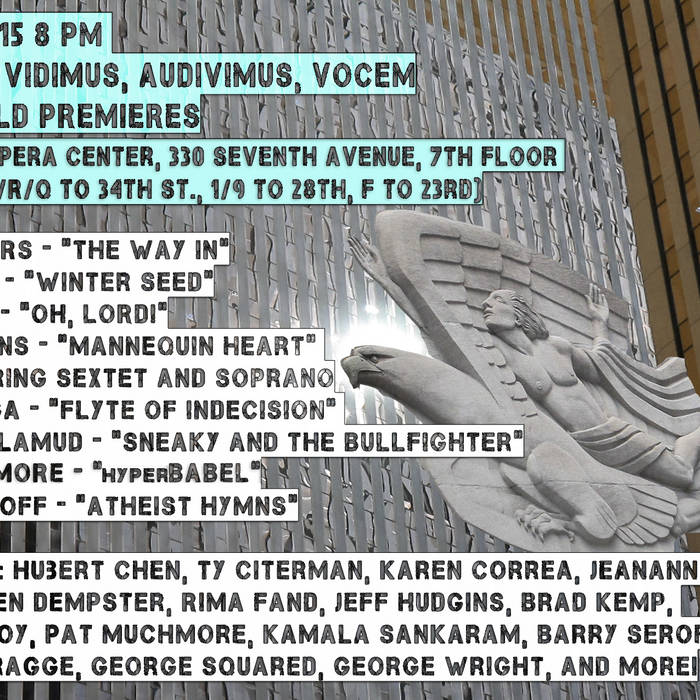 Just as Robert Plant was to Led Zeppelin, as Stevie Nicks was to Fleetwood Mac, as David Lee Roth was to Van Halen, and as Freddie Mercury was to Queen, so too is NY's own Anti-Social Music channeling the power of the human voice in its next all-premieres show, June 21st at the National Opera Center in Manhattan.

This performance of never-before-heard music comes to you from Max Duykers, Rima Fand, Al Giusto, Dan Lasaga, David Mallamud, Pat Muchmore, Barry Seroff, and Jeff Hudgins by way of Anti-Social Music. It will pull on your soulstrings like nothing but God has before. You won't believe your ears. God won't believe his ears. Her ears. Whatever.

Come bear witness to the performing talents of Eli Asher, Hubert Chen, Ty Citerman, Karen Kanan Correa, Jeanann Dara, Loren Dempster, Rima Fand, Jeff Hudgins, Brad Kemp, Patti Kilroy, Pat Muchmore, Kamala Sankaram, Barry Seroff, Greg Squared, George Wright and more! Only then will this sentence make any sense: Join us as we find The Way In from the Winter Seed, Oh Lord! Shake off this Flyte of Indecision from Sneaky and the Bullfighter. Vanquish HyperBABEL with Atheist Hymns and a Mannequin Heart.