by Anti-Social Music/His Name Is Alive 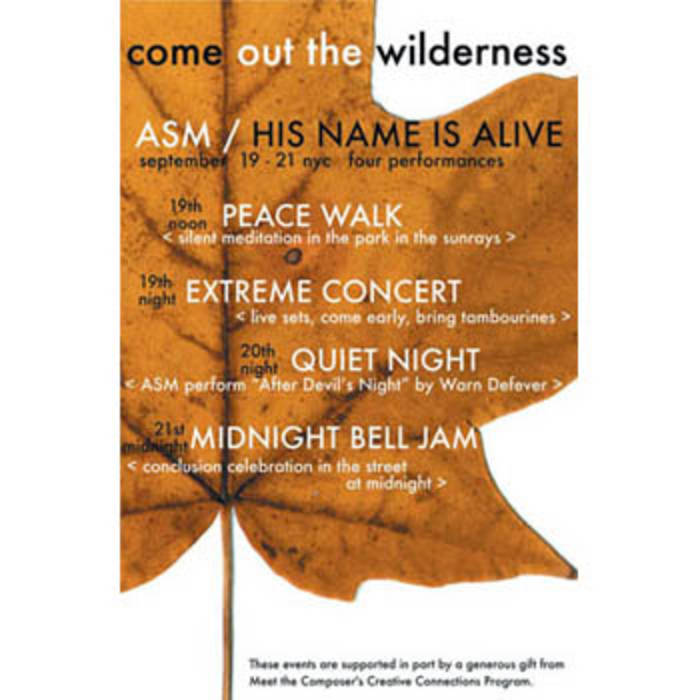 "COME OUT THE WILDERNESS"
four performances 19th-21st September in NYC

Anti-Social Music and His Name is Alive join forces for a three-day four-event residency in New York City called COME OUT THE WILDERNESS, starting with a peaceful prayer meditation in a park, ending with a midnight bell jam in the street, and with shows at Mercury Lounge and Tonic in between.

Help celebrate INTERNATIONAL PEACE WEEK with punk-chamber music group Anti-Social Music (ASM), and Detroit-based band His Name Is Alive (HNIA) ­ who will provide everything from earth-toned outdoor folk music to mountains of extreme sunshine jams. COME OUT THE WILDERNESS is a performance-based piece and a three-day celebration of peace, nature, wolves, chamber music, and magical vibrations!!!

"COME OUT THE WILDERNESS" is performance/event-oriented piece that celebrates a child's earliest memories, a primal love/fear of nature, and hope for a peaceful world. It was originally conceived as a "peace conference."

In 1972, when I was three years old, my mother gave birth to twin boys.

Several months later during a Labor Day vacation, my family was visiting relatives in the Upper Peninsula of Michigan, and one of the twins, Michael, was attacked and killed by a wolf, commonly found in the northern region of the state. His brother, Matthew, survived somehow. Upon arriving back in the Detroit area and shortly following the funeral, my parents changed my middle name to Michael, as a sort of memorial. This experience is one of my earliest memories.

In 2002, I attended a "peace walk" led by Thich Nhat Hanh, a gentle monk from Vietnam whose vaguely Buddhist writings teach that world peace can only be brought about through individual internal transformation. The deceptively simplistic nature of this act profoundly affected my life.

In 2005, I found a folk song, performed by Mississippi Fred MacDowell called ³Come Out Of The Wilderness,² in which the Wilderness seems to be a metaphor for living without religion in your life. The Wilderness as depicted in the Bible is where Jesus is tested for 40 days and where the Israelites spend 40 years on their journey to the Promised Land. In my piece the Wilderness is not a metaphor but simply refers to nature, the woods, organic food, and drinking fermented "muddy water out of a hollow log."

1. A peace walk is a form of non-violent protest in which protesters march a distance, often to raise money for a charity.

2. HIS NAME IS ALIVE are a difficult band to categorize. Their sound is constantly evolving. Their sound is consistently unique. They made their name with expressionistic experiments for the 4ad label. Later music is guided by more graceful concerns.

3. Wilderness is defined by the State of Michigan as "non-managed, roadless areas."

4. COME OUT THE WILDERNESS is not a "staged" event, it is participatory and requires very few materials.

19th PEACE WALK at noon (FREE)
<silent meditation in the park in the sunrays>
Empire-Fulton Ferry Park in DUMBO, BK
Meet at the corner of Water and Main
F to York, AC to High

21st MIDNIGHT BELL JAM at 11.59 pm (FREE)
<conclusion celebration in the street at midnight>
Meet at the corner of Stanton and Ludlow in the street in MANHATTAN
Margaritas to Go! Bring a bell!
F to 2nd Ave

The Mercury Lounge show features sets by His Name is Alive at 10 pm, and Anti-Social Music at 9 pm. Anti-Social Music will perform Apparitions of the Industrial Wasteland by Dan Lasaga, Throw Back. by Ken Thomson, and Fracture II by Pat Muchmore.

The Tonic show features sets by Anti-Social Music, The Naysayer, and Nanang tatang (Dan Littleton and Liz Mitchell from Ida). Anti-Social Music will perform After Devils Night by Warn Defever, Kilter by Peter Hess, i Blame you (l.b.) by Andrea La Rose, and Material Breach by John Wriggle.